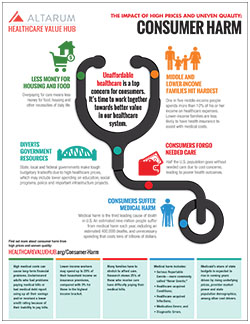 The Impact of High Prices and Uneven Quality

For decades, healthcare costs have risen at rates that outpace the general rate of inflation.

These cost and value issues aren’t just an academic exercise—they have a profound impact on the health and financial security of American families.

Information about the harm consumers face from high prices and uneven quality is below. Also see the interactive and PDF versions of our Consumer Harm infographic.

Less Money for Housing and Food

One in five middle-income people spends more than 10% of his or her income on healthcare expenses. Lower-income families are less likely to have health insurance to assist with medical costs.

High medical costs can cause long-term financial problems. Underinsured adults who had problems paying medical bills or had medical debt report using up all their savings and/or received a lower credit rating because of their inability to pay bills.

Half the U.S. population goes without needed care due to cost concerns, leading to poorer health outcomes.

Many families have to stretch to afford care. Research shows 25% of those who receive care have difficulty paying their medical bills.

Medical harm is the third leading cause of death in U.S. An estimated nine million people suffer from medical harm each year, including an estimated 400,000 deaths, and unnecessary spending that costs tens of billions of dollars.

See our Medical Harm page for more information, including an interactive infographic describing the different types of medical harm.

Middle and Lower-Income Families Hit Hardest One in five middle-income people spends more than 10% of his or her income on healthcare expenses. Lower-income families are less likely to have health insurance to assist with medical costs. Lower-income workers may spend up to 20% of their household income on insurance premiums, compared with 3% for those in the highest income bracket.