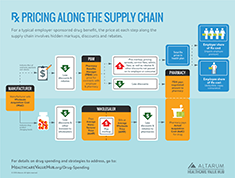 In recent years, prescription drug costs have come under scrutiny as an important driver of high healthcare spending. One method payers use to address these costs is by re-designing drug formularies – lists of brand name and generic drugs that are fully or partially covered by a health plan – to influence consumers’ purchasing decisions.

Tiered formularies divide covered medications into groups, usually based on cost. Insurers use these categories to encourage enrollees to opt for cheaper generic or brand-name drugs instead of higher cost alternatives. Low tier (i.e. inexpensive) drugs have lower out-of-pocket costs for enrollees, while higher tier (i.e. expensive) drugs are have higher out-of-pocket costs. A health plan’s formulary might have three, four or five tiers. For example, tier 1 usually includes generic medications, while tiers 4 and 5 tend to include high-cost specialty drugs.

Evidence suggests that tiered formularies can lower costs when they appropriately signal the relative value of a drug to consumers and when cheaper, therapeutically equivalent drugs are available.1 Tiered formularies are also associated with reduced medicine use, however the impact on quality is not well understood.2

“Adverse tiering” is a controversial practice in which payers place certain (often important) drugs in high cost-sharing tiers in order to make it difficult for enrollees to afford them. At least two studies find evidence of adverse tiering.3 A 2015 analysis from Avalere Health found that some plans offered on the individual health insurance marketplace placed all brand name and generic drugs used to treat complex diseases, such as HIV, cancer and multiple sclerosis, in the highest drug formulary cost-sharing tier.4 Specifically, in five of the 20 drug classes analyzed, all of the drugs were placed in the high-cost tier, leaving consumers with no alternative to high cost drugs. Roughly 30 percent of plans placed all brand name drugs without a generic equivalent for HIV/AIDS in the highest-cost tier. The practice was most common for some cancer and multiple sclerosis drugs.

Adverse tiering is problematic because it places substantial, and potentially unexpected, financial strain on people with chronic conditions. Moreover, the practice will likely lead to adverse selection over time, with sicker people clustering in plans that do not use adverse tiering for their medical conditions.

Some medications have preventive benefits, meaning that they may prevent future illnesses and complications. Placing these drugs on a lower-cost sharing tier (regardless of the original cost of drug) may be appropriate to encourage their continued use.5

What are the rules for Drug Formularies?

The Affordable Care Act’s Essential Health Benefits (EHB) provision requires health plans to offer at least one drug from every therapeutic category or the same number of drugs in each therapeutic category as the state’s benchmark plan, whichever results in the most alternatives for consumers.6 Still, health plans have tremendous flexibility with respect to how enrollee cost-sharing is established. The EHB regulates the number of drugs covered, but does not have requirements for cost-sharing.7

The Department of Health & Human Services requires health plans to use pharmacy and therapeutics (P&T) committees to ensure that formulary lists sufficiently cover prescription drugs, while maintaining the current drug count standards, according to CMS’ benefit and payment parameters.8 The rule mandates that such information must be presented in a way that is easily accessible and understandable to the public in online, as well as machine-readable, formats so that third parties can create applications and tools that enable consumers to explore and compare their options.

A CMS rule finalized in May 2019 allows health insurers to exempt the value of drug company discounts on brand medications from an enrollee’s maximum out-of-pocket costs when a generic is available in order to encourage generic use.9

Pharmacy Benefits Managers (PBMs), theoretically, negotiate with drug manufacturers to lower prices for their clients, including employers and health plans. However, experts have raised questions about whether PBMs are passing rebate savings onto consumers, especially because PBM negotiations with drug manufacturers are confidential.

In some cases, it is possible that, unbeknownst to the employer, a PBM pockets the rebate, while sticking the full cost for the more expensive choice to the employer. Rebates may also skew PBM formulary placement decisions that should be based on the best evidence available, not on perverse financial incentives from drug manufacturer. A study commissioned by the Ohio Department of Medicaid found that that PBMs were engaging in "spread pricing" a practice where PBMs pocket the difference between what they bill to the payer for medications and what they pay the pharmacy to dispense drugs.10

Studies have revealed that pharmaceutical companies give pharmacy benefits managers (PBMs) volume-based rebases in exchange for keeping competing generic/biosimilar competitors off the formulary. A study found that only 17 percent of Medicare plans for seniors covered Basaglar, a biosimilar drug, although nearly all plans covered Sanofi’s more expensive biologic drug Lantus (Basaglar’s originator).11 Another 2015 study found that only 19 percent of generic drugs covered by Medicare were in the formulary tiers with the lowest out-of-pocket costs.12 Thus these “rebate traps” may be discouraging these potentially cost-saving alternatives from entering the market.