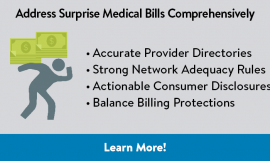 Surprise medical bills include any medical bill for which a health insurer paid less than the patient expected. These bills are alarmingly common—a Kaiser Family Foundation poll1 reveals that one-in-five adults with insurance have received a surprise medical bill, with even higher rates among the privately insured.

Surprise bills can come from in-network or out-of-network providers and occur for a number of reasons:

Patients may not always be able to select in-network providers—particularly during emergencies—and the resulting billing issues are particularly acute for those with private health insurance. Unlike traditional Medicare, in which almost all providers accept Medicare payments and features strong balance billing protections, private health plans have more limited provider networks and few balance billing protections. Furthermore, a 2020 study revealed that though out-of-network spending was a relatively small portion of medical spending and was stable or declining over time, the out-of-network charged amounts actually rose.2 So, while fewer people appear to be using out-of-network services, the cost for those who do is rising.

In 2016, one in 7 privately-insured patients received a surprise medical bill despite obtaining care at an in-network hospital, because they were treated by an out-of-network doctor.3 See Example.

Certain types of medical care are closely associated with surprise OON bills. For example, insurance claims data reveal that one in five (20 percent) inpatient emergency department cases may result in a surprise out-of-network bill, roughly twice the rate of out-of-network cases for elective inpatient care.4 Similarly, half of ambulance cases among patients with large employer-sponsored health plans resulted in an out-of-network ambulance charge in 2014.5  Air ambulances are also a major cause of surprise OON bills. A 2020 report found that less than one-quarter of air ambulance transports of comercially insured patients were in-network, while two out of five transports by air ambulance resulted in a potential balance bill, averaging $19,851.6 Anesthesiology accounted for the largest share of out-of-network professional claims associated with an in-network admission at 17%,7 while independent labs were the most likely to bill out of network at 22%.8

There has been interest among federal and state policymakers in tackling surprise OON medical bills, as most believe these are unfair to consumers. When surprise medical bills arrive from an out-of-network (OON) doctor or facility, they will likely include a “balance bill.” These out-of-network providers are not obligated to accept the insurer's payment as payment in full and may bill the patient for the remaining, unpaid amount.

States regulate private health plans that are sold to individuals and smaller employers, but the U.S. Department of Labor oversees the self-insured plans offered by larger employers.9 (Self-insured employer-sponsored plans cover approximately 61 percent of privately insured employees.)10 However, laws that focus on the regulation of healthcare providers—for example—may protect a larger numbers of consumers by not tangling with ERISA requirements.11 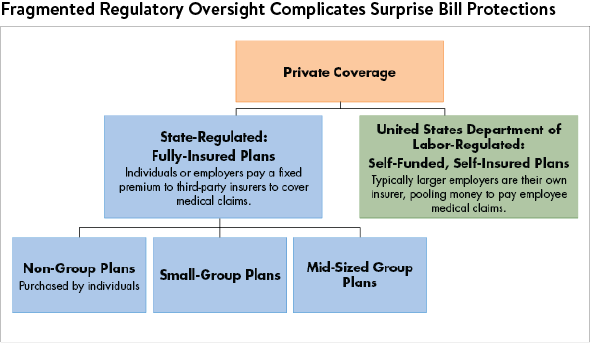 What Can States Do?

To help consumers better understand the terms of their health coverage and which providers are considered in- or out-of-network, states can tackle issues of accurate provider directories, adequate provider networks and disclosure at the point of insurance shopping. To protect consumers from inadvertent surprise out-of-network medical bills, states can implement direct protections for consumers against balance billing for these types of bills.

The federal government has minimum standards for private health plans sold on the ACA Marketplaces, requiring them to update their provider directories monthly and collect up-to-date information from providers quarterly.12 Several states have rules requiring more frequent updates to online provider directories and/or apply those rules to more types of health plans. For a broader discussion, see our Ensure Accurate Provider Directories page.

A general rule of thumb is that a health plan's provider network must be adequate to deliver the benefits promised to the consumer under the plan. For example, the network must have enough OB-GYNs to meet the needs of the women enrolled in the plan. As private health plans pursue narrow networks to rein in premium increases, this standard becomes particularly important. Given the patterns of out-of-network balance billing and the impact on consumers, as discussed above, network adequacy requirements should assess the availability of in-network providers working with in-network hospitals.

For a broader discussion of the importance of network adequacy standards, see our Ensure Adequate Provider Networks page.

3. Better Disclosure at the Point of Insurance Shopping

It is difficult for consumers to have a good sense of a provider’s network when shopping for health plans. Much more can be done to convey the strength of the provider network to consumers at the point of health plan shopping. We are aware of no states that currently use summary indicators to signal the size of a provider’s network, even though researchers developed methodologies for this purpose.13 Moreover, no states currently inform shoppers as to the likelihood they will receive an out-of-network bill for care at an in-network hospital or facility. Researchers have similarly developed claims data analyses that tease out this information, proving feasibility.14

Only Texas has a law that requires health plans to report the percentage of dollars billed as out-of-network by certain providers and whether the hospital has no in-network providers for certain services. In order to help consumers, reporting requirements like those in Texas must be accompanied by public reporting, as was done by an advocacy group in recent years.15

In most states, patients with private health insurance have only limited protections when they inadvertently use an out-of-network providers—e.g., an emergency medical need or a member of their care team turned out not to be in their health plan network. Though the ACA requires insurers make comparable payments for in-and out-of-network emergency services, it does not prevent providers from asking patients to pay the balance.16

These types of protections must be accompanied by a payment standard or a dispute-resolution mechanism to resolve payment disputes between providers and insurers.

10. The Employee Retirement Income Security Act (ERISA) is a federal law that sets minimum standards for most retirement and health plans in private industry. This federal oversight pre-empts state oversight of employer health plans. But when employer plans are fully insured, as is common with smaller employers, states can regulate the insurers itself.