According to a survey of more than 920 Maine adults, conducted from Oct. 18, 2021 to Oct. 28, 2021, residents are concerned about prescription drug costs and express a strong desire for government-led solutions.

More than half (55%) of survey respondents report being either “somewhat worried” or “very worried” about affording the cost of prescription drugs. Worry varies by income group, with residents in households making less than $50,000 per year experiencing the most worry (see Figure 1). It is important to note, however, that large percentages of people in higher earning households report being somewhat or very worried about affording prescription drugs, as well.

In addition to worrying about prescription drug affordability in the future, many Maine residents report difficulty affording prescription drugs in the past 12 months. Cost concerns led nearly one-third (30%) of Maine adults to not fill a prescription, cut pills in half or skip a dose of medicine (see Figure 2).

Surprisingly, these hardships disproportionately impact people in higher income households. As Figure 3 shows, households earning above $100,000 per year1 are more likely to have rationed medication by not filling a prescription, cutting pills in half or skipping a dose due to cost concerns. Prescription drug affordability burdens are alarmingly prevalent in middle- and low-income households as well, leading more than one-fourth of these respondents to not take medications as prescribed.

The likelihood of medication rationing is relatively consistent across congressional districts, with roughly one-third of residents in both districts reporting forgoing medication due to cost (see Table 1).

Younger Mainers (ages 18-34) and those who buy health insurance on their own are also more likely to have rationed their prescription medications due to cost (see Figures 4 and 5).

In light of these prescription drug cost concerns—as well as concerns about high healthcare costs generally3—it is not surprising that Maine adults are dissatisfied with the health system:

When it comes to tackling high drug costs, Maine adults endorsed a number of strategies:

There is substantial support for government action on drug costs regardless of the respondents’ political affiliation (see Table 2). 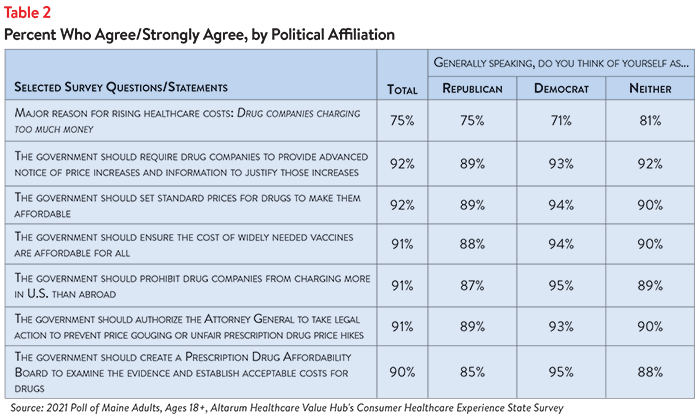 While Maine residents are united in calling for the government to address high drug costs, they also see a role for themselves:

The high burden of healthcare and prescription drug affordability, along with high levels of support for change, suggest that elected leaders and other stakeholders need to make addressing this consumer burden a top priority. Moreover, the current COVID crisis is leading state residents to take a hard look at how well health and public health systems are working for them, with strong support for a wide variety of actions. Annual surveys can help assess whether or not progress is being made.

2. For the purposes of this survey, all of Kennebac county was included within Congressional District 2. However, in reality, Kennebac county is divided between both districts.