Many New Jersey Residents Struggle with Medical Debt, Highlighting Healthcare Affordability Issues Even for Those with Insurance

Almost all (96%) of New Jersey respondents with medical debt report having health insurance and 4 in 5 (80%) report being in good, very good or excellent health.  Just over half (51%) report having employer-sponsored insurance, while lower numbers are covered by Medicare (19%), insurance bought on the exchange (13%) and NJ Family Care (13%). Three in four respondents (75%) had no gaps in coverage in the past 12 months.

Disparities in the Amount and Reasons for Medical Debt

Medical debt affects New Jersey consumers of many races/ethnicities and along the income spectrum; however, disparities do occur.

There are some differences across income brackets related to why respondents with insurance still accrued medical debt. Those earning less than $50,000 were the most likely to report that they accrued medical debt despite having health insurance because their plan did not cover the service (56%). However, very similar percentages of respondents from all other income brackets reported the same reason (see Figure 3). Those earning over $100,000 were the most likely to report that the reason they accrued debt was because their deductible was too high (40%), although similar percentages of those earning between $50,000-$75,000 (35%) and between $75,001 - $99,999 (36%) reported the same. Interestingly, almost a quarter (22%) of those earning below $50,000 reported their deductible being too high was a cause of their medical debt. High coinsurance also seemed to be a common reason for medical debt accrual across all income levels, though notably less so for those earning $100,000 or more.

Unsurprisingly, high-income earners were more likely than low-income earners to have paid down some amount of their medical debt in the past year. More than 4 in 5 (83%) of respondents earning over $100,000 report paying some amount towards their medical debt in the past 12 months, compared to 54% of those earning below $50,000.

It is well-documented that white households in the U.S. tend to have more wealth than Hispanic/Latinx and Black/African American households, which may increase the ability of white respondents to take on more medical debt. Evidence also suggests that Hispanic/Latinx and Black/African American individuals are more likely to avoid care due to cost and other factors (such as trust in medical providers) than white individuals, which may impact their likelihood of accruing medical debt.1,2 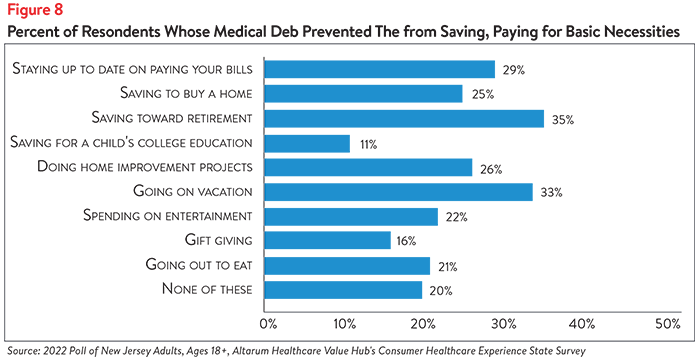 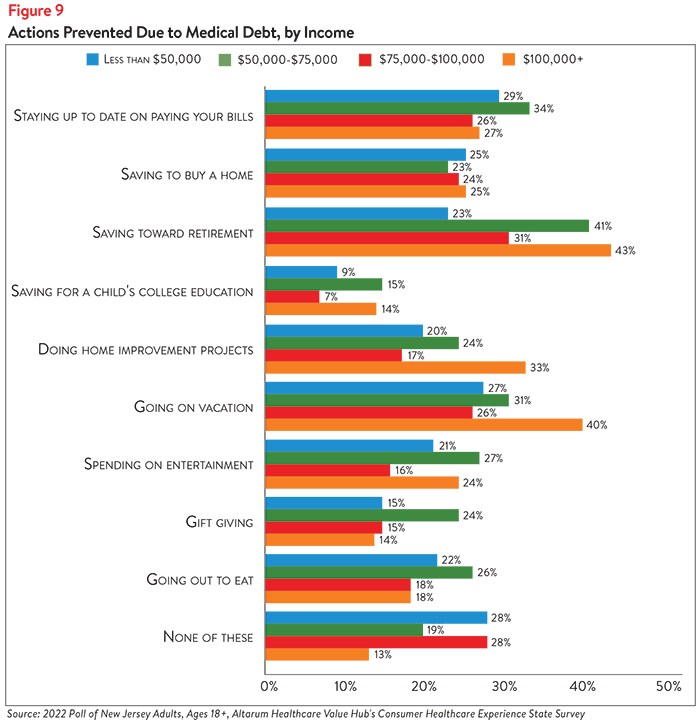 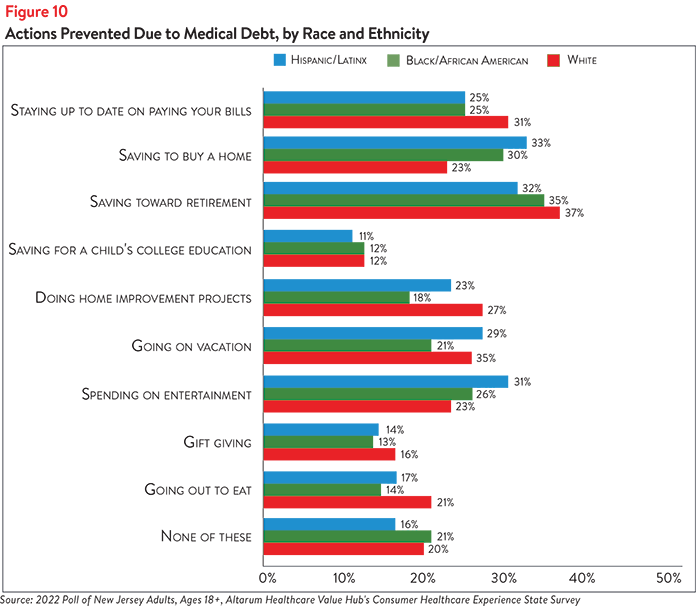 One in four respondents (25%) report that medical debt has prevented them from saving to buy a house, while greater than one-third (35%) report not being able to save for retirement (see Figure 7). Differences in ability to save for big-ticket items—such as retirement, a house or a child’s college education—were observed across income and racial/ethnic groups. Respondents earning less than $50,000 were among the least likely to report that their medical debt prevents them from saving for retirement (23%) or a child’s college education (9%), perhaps because they were already less likely than higher-income earners to do so (see Figure 9). More than 40% of respondents earning more than $100,000 per year and $50,000-$75,000 per year report not saving for retirement, while roughly 15% report not saving for a child’s college education due to medical debt. Respondents earning less than $50,000 most frequently report that medical debt prevents them from saving to buy a home (25%), although respondents across all income groups reported similar rates of avoiding this behavior.

Similar percentages of Hispanic/Latinx, Black/African American and white respondents report that medical debt prevents them from saving for retirement (32%, 35% and 37%, respectively), as well as a child’s college education (11%, 12% and 12%, respectively) (see Figure 10). However, Hispanic/Latinx respondents and Black/African American respondents were more likely than white respondents to report that their medical debt prevents them from saving to buy a house (33% and 30%, respectively, compared to 23%). This finding is particularly concerning given the historic and continuing racial and ethnic disparities in property ownership in the U.S. and the relationship between property ownership, generational wealth and the racial wealth gap.3

New Jersey respondents also report making difficult sacrifices to pay off their medical debt. Of the 71% of respondents who had paid at least something towards their medical debt in the past year, almost 1 in 5 (19%) report using money that was intended for necessities like food, heat or housing (see Figure 11). Two in five (40%) report using money from their emergency fund or savings and 42% used a credit card (which typically have high interest rates, making it even more difficult to pay down existing debt).

3 in 5 New Jersey respondents (62%) report that their medical debt was the result of a single event. Of the options provided, the most common causes of single-incident medical debt were:

Roughly 2 in 5 respondents (38%) report that their medical debt stemmed from multiple events. When asked which services caused their multiple-incidence medical debt, the top vote getters were:

Given the high prevalence of accidents/injuries causing medical debt, it is unsurprising that New Jersey hospitals are a main site of medical debt creation. Of more than 8 options provided, respondents identified the sources of their medical debt (respondents were not limited in their site selection). Top selections were:

Of particular concern is that half (49%) of respondents with no insurance coverage report not being informed of their hospital’s financial assistance or charity care policies. Given the legal obligation of nonprofit hospitals in New Jersey to inform eligible residents of the New Jersey Hospital Care Payment Assistance Program, it is concerning that uninsured patients, who are the most likely to be eligible, were unaware of their financial assistance or charity care options.

Fighting medical debt lawsuits can be difficult and time-consuming, and 2 in 5 (40%) of respondents report that they do not understand their legal rights related to medical debt collection. Indeed, just 4% of all respondents filed a lawsuit against their medical debt.

Given the aggressive collection tactics and financial ramifications of medical debt, it is unsurprising that nearly 4 in 5 respondents (79%) report being somewhat or very anxious about their medical debt. Given the dire, and often inequitable, health and financial impacts of medical debt, state policymakers should investigate policies to protect residents by preventing medical debt from occurring and curbing aggressive debt collection practices. Annual surveys can help assess whether progress is being made.

2. Richmond, Jennifer, What Can We Do About Medical Mistrust Harming Americans’ Health? Interdisciplinary Association for Population Health Science (Accessed June 16, 2022).

Altarum’s Medical Debt Survey is designed to elicit respondents’ unbiased views on a wide range of issues surrounding medical debt. The survey used a web panel from Dynata with a sample of approximately 1,005 respondents who live in New Jersey and currently have medical debt. The survey was conducted in English or Spanish and restricted to adults ages 18 and older. Respondents who finished the survey in less than half the median time were excluded from the final sample, leaving 963 cases for analysis. After those exclusions the demographic composition of respondents was as follows, although not all demographic information has complete response rates: 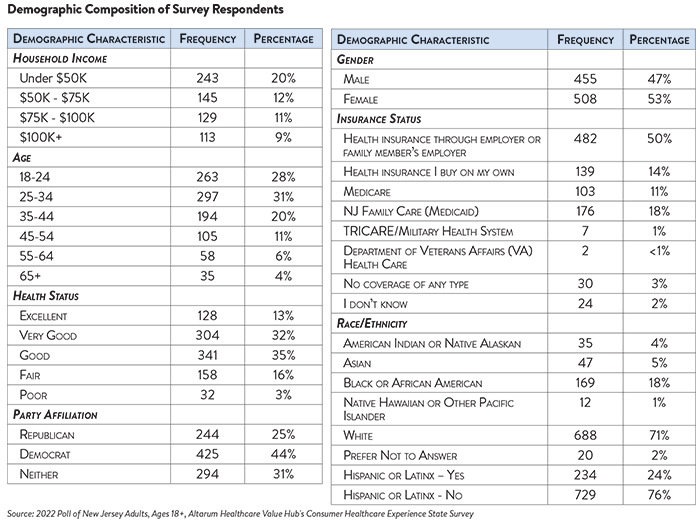 To help protect low-income consumers, the Affordable Care Act (ACA) requires nonprofit hospitals to provide charity care to eligible patients in order to retain their tax-exempt status.1 In addition, government hospitals are similarly required to provide charity care to financially disadvantaged patients. However, for both institutional requirements, there are no quantitative requirements for charity care. Equally importantly, hospitals are also required to widely publicize the availability of such policies.

New Jersey’s charity care regulations are more generous than those in many other states. All acute care hospitals in the state must participate in the state’s Hospital Care Payment Assistance Program (charity care), though they are not required to adopt their own financial assistance policies. To be eligible for no-cost charity care for necessary services, a person must be uninsured or have insurance that covers only part of their bill, ineligible for private or governmental coverage, and have a family income of less than or equal to 200% FPL.2

Eligible individuals with incomes between 200-300% FPL are eligible for charity care at a reduced rate, paying anywhere from 20-80% of the cost of their care.3 New Jersey also requires the Department of Health to establish a sliding scale for hospital charges for individuals whose family gross income is less than 500% FPL, though these individuals must also be uninsured.