According to a survey of over 1,150 Massachusetts adults conducted from May 7, 2021 to May 25, 2021, residents are concerned about prescription drug costs and express a strong desire to enact solutions.

Almost half of all survey respondents (47%) reported being either “somewhat worried” or “very worried” about affording the cost of prescription drugs. Worry varied by race/ethnicity, household income and region—Hispanic/Latino and Black/African American residents, people earning less than $100,000 and residents of the Boston region reporting the greatest concern of all (see Figures 1-3). 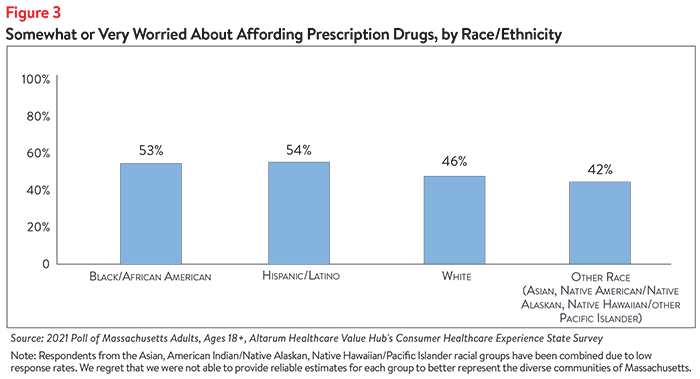 These hardships impact certain groups of Massachusetts residents more than others. As Table 1 shows, people in households earning less than $50,0001 per year are more likely to have rationed their prescription medicines than people in households making more than $100,000 per year. Rationing medication due to cost is alarmingly prevalent in middle income households, as well. 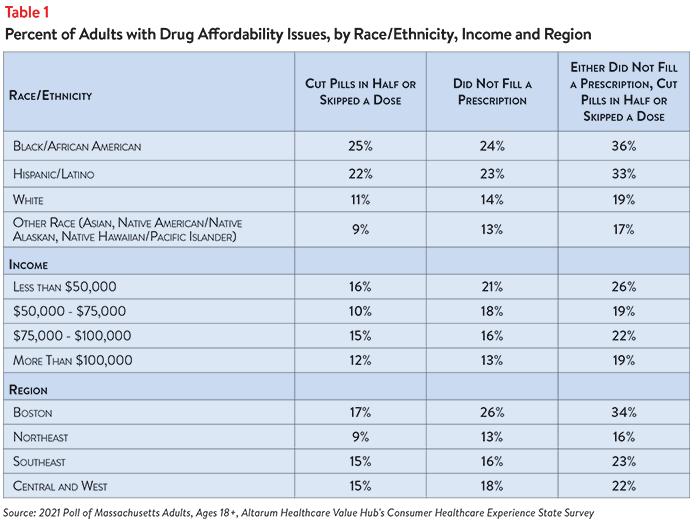 When given more than 20 options, the option cited most frequently as being a “major reason” for high healthcare costs was “drug companies charging too much money.”

When it comes to tackling high drug costs, Massachusetts adults endorsed a number of strategies:

Moreover, there is remarkably high support for government action on drug costs regardless of respondents' political affiliation (see Table 2).

While Massachusetts residents are united in calling for the government to address high drug costs, they also see a role for themselves:

The high burden of healthcare and prescription drug affordability, along with high levels of support for change, suggest that elected leaders and other stakeholders need to make addressing this consumer burden a top priority.2 Moreover, the current COVID crisis is leading state residents to take a hard look at how well health and public health systems are working for them, with strong support for a wide variety of actions. Annual surveys can help assess whether or not progress is being made.

The survey used a web panel from Dynata with a demographically balanced sample of approximately 1,250 respondents who live in Massachusetts. The survey was conducted in English or Spanish and restricted to adults ages 18 and older. Respondents who finished the survey in less than half the median time were excluded from the final sample, leaving 1,158 cases for analysis. After those exclusions, the demographic composition of respondents was as follows, although not all demographic information has complete response rates: 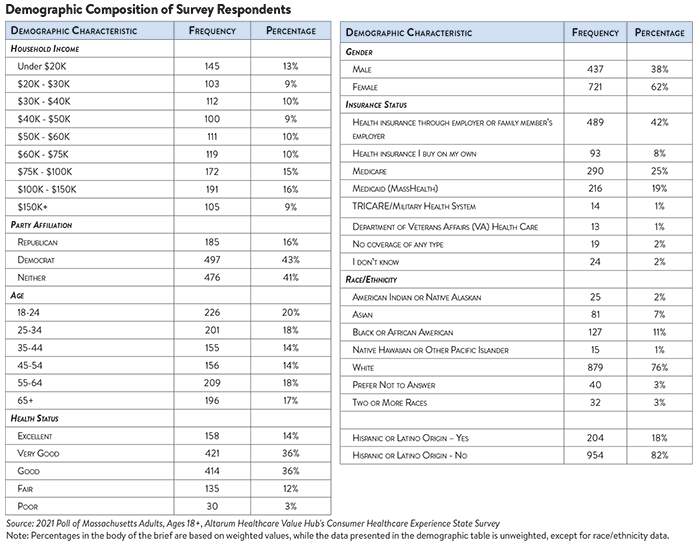