Medical harm is a remarkably common but poorly understood problem. Although estimated to be the third leading cause of death in the U.S.,1 surprisingly little is done to measure, study and address the full spectrum of medical harm that affects the lives of millions of people every year.

Ambiguities in terminology can inhibit our ability to respond to the medical harm problem. The current lexicon is a bewildering combination of commonly used and well-recognized terms that are also overlapping and, at times, ambiguous. Confusion is caused in part because terms have been established over time through multiple channels: statutes and government regulations as well as academic research.

This taxonomy seeks to define and describe the different types of medical harm and how they overlap. With this additional clarity we hope to speed action to address this vital problem.

Medical Harm is the broadest term in our lexicon. There is no uniform definition of medical harm. Two leading organizations define medical harm thusly:

The term iatrogenic harm is also used to refer to when a patient acquires a new illness or is injured by services provided by a medical provider. This comes from the Greek “Iatros,” which means doctor or healer, and “gennan,” which means “as a result.”

Medical errors are a type of medical harm. According to the seminal 1999 Institute of Medicine (IOM) study, To Err Is Human, an error can be defined as the “[f]ailure of a planned action to be completed as intended or the use of a wrong plan to achieve an aim.”4

Medical error is an over-arching term that is often used interchangeably with other terms, such as: adverse events, serious reportable events, potentially preventable harm, preventable adverse events, hospital and healthcare-acquired conditions, provider preventable conditions, and iatrogenic events. As discussed below, many of these terms have a precise meaning—especially when used with programs that tie payments to specific types of events. Hence, in that technical context, these terms are not perfectly interchangeable (see Figure 1). 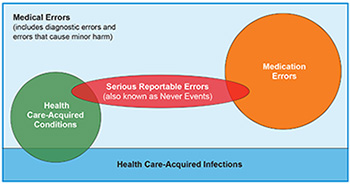 Healthcare-Acquired Infections (HAIs), simply put, are infections that are not associated with the reason for which a person went to the hospital or sought healthcare.

HAIs are a type of medical harm typically distinguished from medical errors. This could be due to the fact that information about infections is tracked using different mechanisms and strategies and often addressed by professionals trained in epidemiology or infectious diseases. In the landmark IOM report on medical errors,5 there was little discussion of healthcare-acquired infections but the research upon which the IOM based its estimates of deaths from medical errors included these infections.6

One would think that the Centers for Disease Control and Prevention (CDC) would have a simple definition of a healthcare-acquired infection, but it does not. The CDC definitions of infections are technical, used for surveillance purposes to determine the cause of infections. For example, the CDC more precisely defines which infections are considered to have come into the hospital with the patient (“community acquired”) and those that are considered to have occurred while in the hospital (identified by symptoms occurring within defined hours of admission or discharge).

HAIs can also be referred to by the type of bug associated with them. For example, antibiotic resistant infections like MRSA, CRE and Clostridium difficile (C.diff),7 with the latter two having been put on the CDC’s urgent threat list. All three of these are linked to the over use of antibiotics, which are often prescribed unnecessarily or used inappropriately.

Serious Reportable Events (SREs) are largely, if not entirely, preventable clinical events that cause serious patient harm. These standardized, universally defined terms were created by the National Quality Forum (NQF) and vetted and endorsed by experts in patient safety measurement. Examples include surgery on the wrong body part or an object left inside a patient after surgery. SREs are used by public and private payers to measure, report on, and reimburse hospital performance. SREs are also known as never events. SREs are relatively infrequent, but very serious for affected patients.

There are a few SRE’s that are not considered medical errors. These include: sending an infant home with the wrong parents, patient abduction or sexual assault of a patient while receiving care.

Medication errors are another common subset of medical error. These can happen during the ordering, administration, transcribing and dispensing (at a pharmacy) of medications. A recent study of medication errors that occurred during surgery found that the most frequent mistakes were in labeling, incorrect dosages and medications that should have been given but were not.8

An adverse drug reaction—or adverse drug event—is different. It is a harmful response to a prescribed drug, like a side effect or an allergic reaction to the drug. Adverse drug events may or may not be preventable, for example, if the patient has a known allergy to a drug it would be a preventable error. Adverse reactions should be reported to the U.S. Food and Drug Administration’s (FDA) MedWatch,9 which is responsible for overseeing the safety and effectiveness of prescription drugs. These reactions can indicate a larger problem which may warrant alterations of the drug to prevent widespread harmful reactions.10

Hospital-acquired conditions (HACs) are defined by CMS and are used by public and private payers in hospital reimbursement.11 These are conditions which occur in the hospital, cause injury to patients, could reasonably have been prevented through the application of evidence-based guidelines, are high cost or high volume or both, and have been coded in a way that leads to higher payment for the hospital. HACs include some medical errors and some hospital-acquired infections (see Figure 1).

To make things more confusing, different programs define HACs in different ways—although there is overlap. For example one CMS program, the Hospital Acquired Condition Nonpayment Program, identifies 10 preventable mistakes for which hospitals would not receive additional payments for treating injured patients. (Federal regulations also prohibit hospitals from seeking payment from patients for the treatment needed due to these conditions.) A second CMS program, the HAC Reduction Program, reduces Medicare payments across the board to hospitals that score in the lowest quartile in the nation on a different group of mistakes. More recently, the term has been broadened in some contexts to include non-hospital settings (such as dialysis facilities and home health) by using the expanded term “healthcare-acquired conditions.”

Other Types of Errors

Adverse events associated with medical devices are injuries stemming from medical devices that could range from surgically implanted devices to diagnostic devices to external defibrillators. In 2015, multiple hospital-acquired infection outbreaks were reportedly caused by contaminated duodenoscopes used for gastrointestinal treatments. Deadly bacteria remained in the scopes, even after using the device manufacturers’ cleaning instructions. Device makers are required by law to report certain device-related adverse events and problems to the FDA’s MedWatch system.13 Healthcare providers and patients are also encouraged to report adverse events through MedWatch. These reports help the FDA alert the public about potentially hazardous devices. In the case of duodenoscopes mentioned above, this alert system failed and many patients were harmed. Other recent examples have included metal-on-metal hip implants and surgical mesh.

Failure to correctly diagnose is a form of medical error which is not rigorously defined, measured or reported. Nonetheless, limited data suggests this is all too frequent. A review of studies finds that diagnoses may be wrong 10-20 percent of the time.14 In the outpatient setting, a recent study finds that 1 in 20 patients may experience a diagnostic error.15

Efforts to elevate and address medical harm are hampered by the wide variety of terms and definitions used by advocates, professionals, think tanks and government entities. What’s more, confusing terms make it difficult to engage consumers around this issue. Additionally, consumers significantly underestimate how often patients are harmed by medical care.16

While the goal is zero harm, there may be medical harm that is not preventable—for example, an allergic reaction to a drug being administered to a certain patient for the first time. What’s more, what is considered “preventable” changes over time, reflecting improved tools, protocols, and processes. Scholarly articles in the past estimated that 10-70 percent hospital-acquired infections were preventable, with one overview of existing studies in 2003 citing a general estimate of 20 percent.17 In recent years, following public reporting and many efforts to improve prevention, studies generally use the higher end of that range.18

Some use “preventable medical harm” to distinguish between harm that can be avoided and harm that is inevitable. It is our opinion that without a vision of zero harm, there will always be an excuse for a harmed patient rather than an effort to determine how it could have been prevented. What’s more, the extent of injury to a patient from medical errors is highly dependent upon the patient’s condition. For example, even if a fall doesn’t seriously harm a healthy patient it could seriously injure a more vulnerable patient, hence steps should be taken to prevent all falls.

Another area of debate are whether or not to track or report benign errors—errors that don’t result in harm—and near misses—errors that are caught before harm occurs. Consumers Union believes that healthcare provider documentation and tracking of near misses and benign errors is a key component of any comprehensive approach to error prevention.

The bottom line: definitional issues should not obscure the fact that all forms of medical harm are shockingly prevalent, affecting an estimated nine million people, including an estimated 400,000 deaths, and costing tens of billions of dollars in unnecessary spending every year (see Table 1). As previously noted, medical harm is the third leading cause of death in U.S.19

Medical harm is a serious problem for our healthcare system that deserves increased scrutiny and resources from national, state and local leaders. Consumers Union supports public reporting of medical harm; dedicating significant resources for harm prevention education for healthcare providers; and pay-for-performance programs that tie prevention to payments made by Medicare, insurers and state funded programs.