A survey of over 920 Michigan adults, conducted from October 20, 2021 to December 16, 2021, found that people living in non-rural areas of Michigan experience slightly greater healthcare affordability burdens than people living in rural areas of the state. Roughly 6 in 10 (58%) non-rural adults experienced one or more of the following healthcare affordability burdens in the prior 12 months, compared to 5 in 10 (54%) rural adults.

Delaying or Forgoing Healthcare Due to Cost

Nearly half (46%) of rural Michigan adults encountered one or more cost-related barriers to getting healthcare during the prior 12 months, compared to a slightly higher 52% of non-rural Michigan adults. The percentage of people who delayed or skipped needed care varied by service type (see Table 1). Geographic differences in rationing care were highest for mental healthcare and/or addiction treatment and prescription drugs, with non-rural residents more likely than rural residents to report delaying or forgoing these forms of care due to cost. 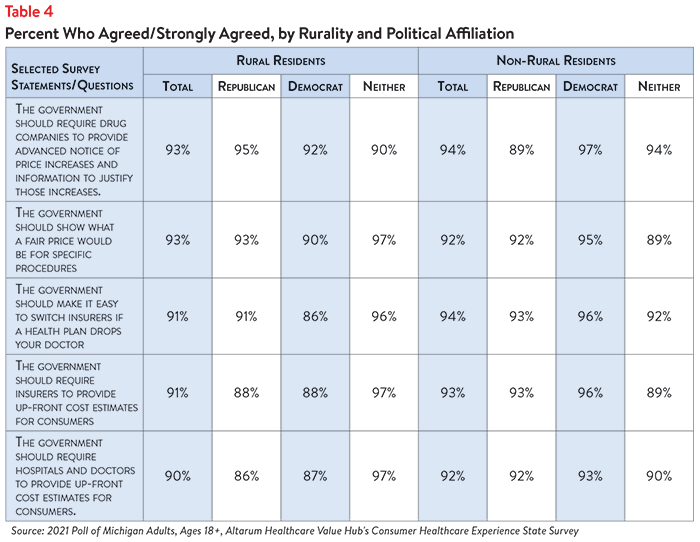 The high burden of healthcare affordability, along with high levels of support for change, suggest that elected leaders and other stakeholders need to make addressing healthcare costs a top priority. Moreover, the current COVID crisis is leading state residents to take a hard look at how well health and public health systems are working for them, with strong support for a wide variety of actions. Annual surveys, such as this one, can help assess whether or not progress is being made.

The survey used a web panel from Dynata with a demographically balanced sample of approximately 1,000 respondents who live in Michigan. The survey was conducted in English or Spanish and restricted to adults ages 18 and older. Respondents who finished the survey in less than half the median time were excluded from the final sample, leaving 926 cases for analysis. After those exclusions, the demographic composition of respondents was as follows, although not all demographic information has complete response rates: 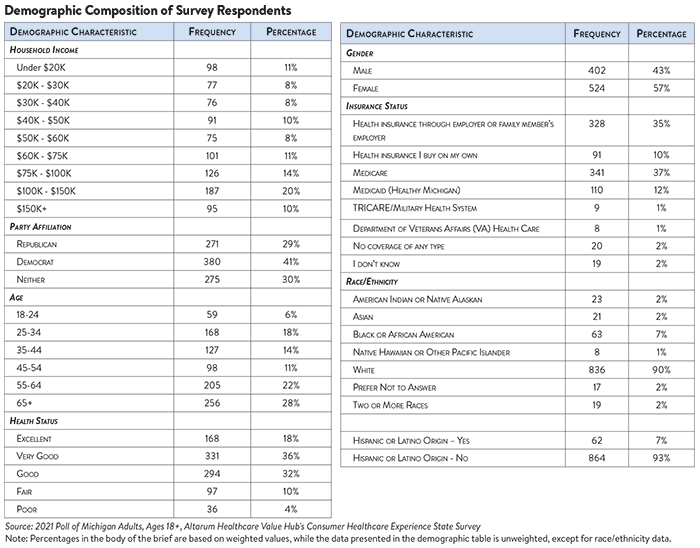