According to a survey of 1,172 adults, Virginians are extremely concerned about prescription drug costs and express a strong desire to enact solutions.

Half (50%) of all survey respondents reported being either “worried” or “very worried” about affording the cost of prescription drugs. The uninsured, those that purchase private coverage individually and those on Medicaid were the most concerned about affording drugs (see Figure 1).

Concerns about affording drugs may be tied to concerns about the security of health coverage. As detailed in a companion data brief,1 many respondents worried about losing their health coverage or being unable to afford their insurance, with those on Medicaid and those that buy private insurance coverage on their own (not through an employer) having the highest rates of insurance worry.

In addition to high levels of worry, many Virginia residents experienced hardship due to drug costs. One in four (27%) of survey respondents reported not filling a prescription and/or cutting pills in half in the prior 12 months due to concerns about cost (see Figure 2).

In light of concerns about high healthcare costs—including prescription drug costs—it is not surprising that Virginia residents were extremely dissatisfied with the health system:

When given more than 20 options, the option cited most frequently as being a “major reason” for high healthcare costs were drug companies charging too much money:

While government action was strongly viewed as more effective to address high drug costs, respondents also saw a role for themselves in solving problems. They reported actions they have already taken, like researching the cost of drug beforehand (61%), as well as future actions—80% believe that switching to a generic if given the option is one of the top things they can do personally to address affordability.

The survey used a web panel from SSI Research Now containing a demographically balanced sample of approximately 1,200 respondents who live in Virginia. The survey was conducted from March 12 through April 2, 2019 only in English and restricted to adults ages 18 and older. Respondents who finished the survey in less than half the median time were excluded from the final sample, leaving 1,172 cases for analysis with sample balancing occurring in age, gender and income to be demographically representative of Virginia. After those exclusions, the demographic composition of respondents is as follows. 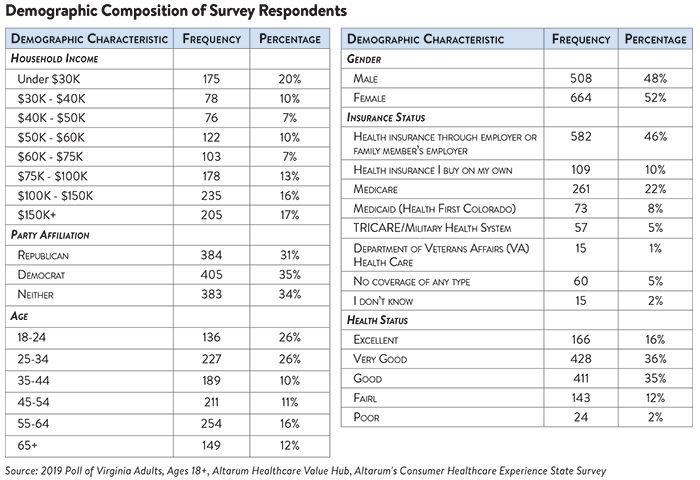