Difference in Affordability Burdens and Concerns

Racial disparities in healthcare and affordability issues impact access to care and beget financial burdens for communities of color, particularly Black and Hispanic/Latinx communities.1,2 In Connecticut, respondents of color reported higher rates of affordability burdens than white respondents, including higher rates of rationing medication due to cost; delaying or going without care due to cost; and incurring medical debt, depleting savings or sacrificing basic needs (like food, heat and housing) due to medical bills (see Table 1). 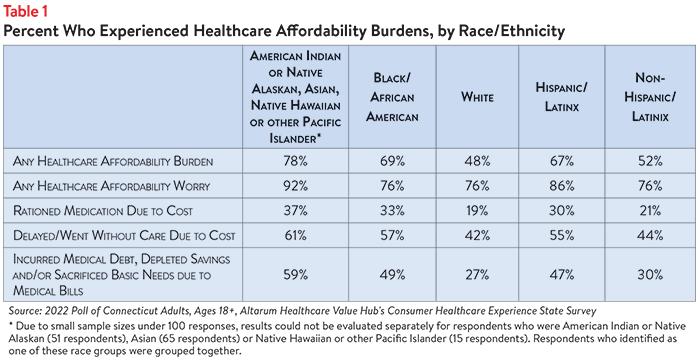 In addition to rationing medication, respondents of color more frequently reported difficulty getting mental health treatment and delaying/going without medical assistive devices due to cost, alongside problems getting addiction treatment and going without dental care (see Figure 1 and 2).3 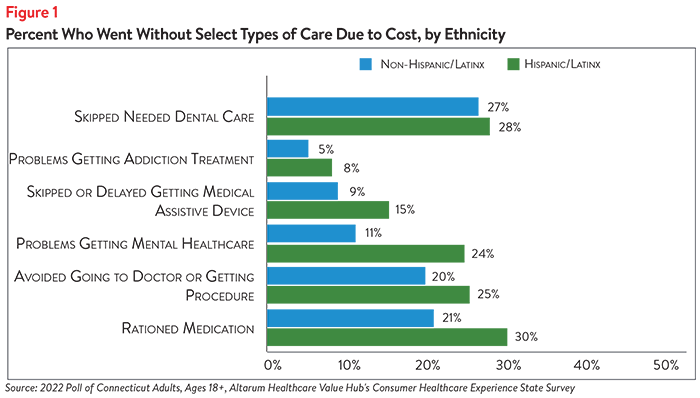 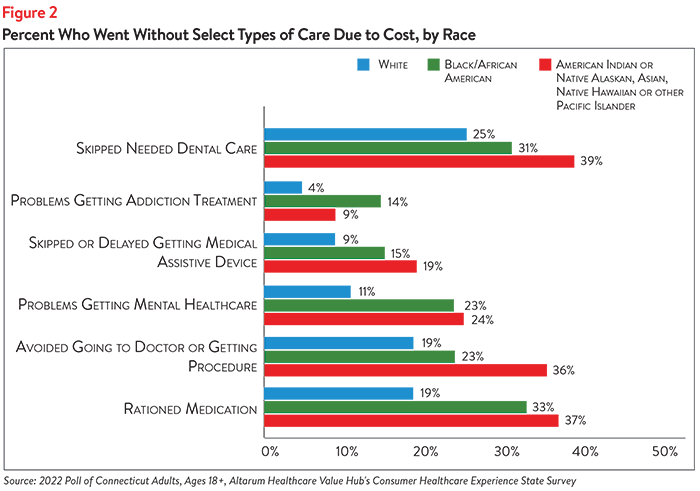 The survey also revealed differences in how Connecticut respondents experience healthcare affordability burdens by income. Unsurprisingly, respondents at the lowest end of the income spectrum most frequently reported affordability burdens, with two-thirds (67%) of those with household incomes of less than $50,000 per year struggling to afford healthcare in the past 12 months (see Table 2). Still, roughly half of respondents living in middle- and high-income households reported struggling to afford some aspect of coverage or care, demonstrating that affordability problems go far up the income ladder. At least 66% of respondents in each income group reported being worried about affording healthcare either now or in the future.

Respondents living in lower-income households also more frequently reported rationing care due to cost. More than half (57%) of lower-income earners reported delaying or going without at least one healthcare service or treatment due to cost in the past year, compared to less than half (37% to 43%) of those earning over $75,000. Additionally, over 1 in 4 (28%) of respondents with household incomes of $50,000 or less reported not filling a prescription, skipping doses of medicines or cutting pills in half due to cost, compared to fewer than 1 in 5 respondents in other higher income brackets.

Lower-income individuals also most frequently reported financial consequences after receiving healthcare services—up to 46% of individuals who earn less than $75,000 a year either went into medical debt, depleted their savings or sacrificed other basic needs (like food, heat or housing) due to medical bills, compared to up to 27% of those earning over $75,000.

The survey also surfaced differences in healthcare affordability burdens and worry by gender. Women who responded to the survey were more likely to report having experienced at least one affordability burden in the past year than those identifying as men (56% versus 53%) (see Table 4). While women more frequently reported delaying or going without care due to cost in general, men reported higher rates of rationing their medications by not filling a prescription, skipping doses or cutting pills in half.

While most respondents of both genders reported being somewhat or very concerned, a higher percentage of women reported worrying about affording some aspect of coverage or care than men (82% versus 73%).

Due to the small sample size, this survey could not produce reliable estimates exclusively for transgender or genderqueer/nonbinary respondents. However, it is important to note that these groups experience unique healthcare affordability burdens—1% of survey respondents (16 respondents) reported that they or a family member had trouble affording the cost of gender-affirming care, such as hormone therapy or reconstructive surgery.

Disrespect and Mistrust in the Health System

Whether a patient trusts and/or feels respected by their healthcare provider may impact whether they seek needed care. In Connecticut, over 1 in 4 (27%) of respondents reported that their provider never, rarely or only sometimes treats them with respect. When asked why they felt healthcare providers did not treat them with respect, four out of ten respondents cited their income or financial status (40%), followed by race (30%), ethnic background (24%), physical, mental or cognitive disability (22%) and gender/gender identity (20%). In lesser numbers, respondents cited experience with violence or abuse (12%) and sexual orientation (10%) as reasons for the disrespect.

Respondents of color and those with a person with a disability in their household more frequently reported distrust in and feeling disrespected by their healthcare providers than their white or non-disabled counterparts (see Table 5). They also more frequently went without medical care due to that distrust and/or disrespect. Thirty-eight percent of respondents of color skipped needed medical care due to distrust of or feeling disrespected by healthcare providers, compared to 14% of white respondents. Additionally, 39% of respondents who have/are living with a person with a disability went without care due to distrust or disrespect, compared to 15% of those without a household member with a disability. 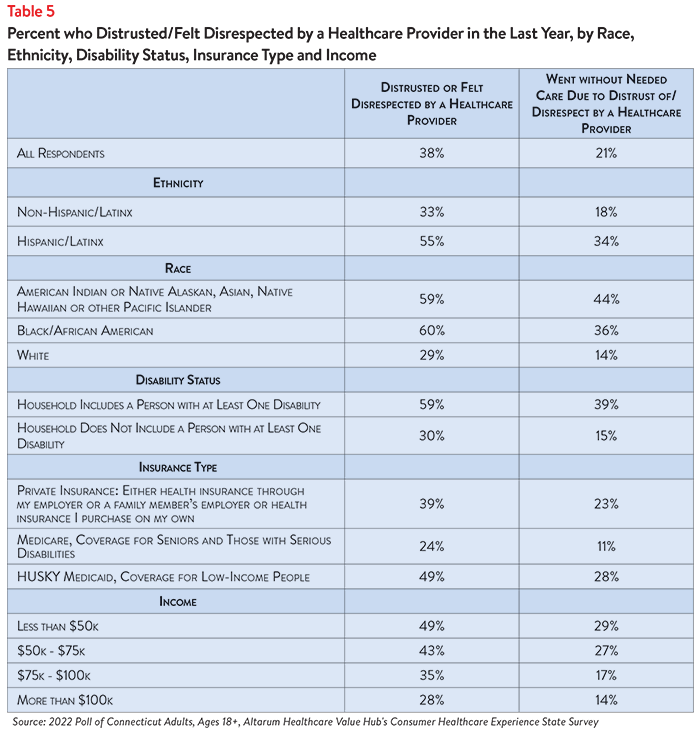 In addition, respondents covered through HUSKY Medicaid (coverage for low-income people) reported higher rates of distrusting or feeling disrespected by a healthcare provider compared to those with private insurance and Medicare. Respondents earning less than $50,000 most frequently reported distrust/disrespect as well as going without care due to distrust/disrespect.

Given this information, it is not surprising that 70% of respondents agree or strongly agree that the U.S. healthcare system needs to change. Understanding how the healthcare system disproportionately harms some groups of people over others is key to creating a fairer and higher value system for all.

Making healthcare affordable for all residents is an area ripe for policymaker intervention, with widespread support for government-led solutions across party lines. For more information on the types of strategies Connecticut residents want their policymakers to pursue, see: Connecticut Residents Struggle to Afford High Healthcare Costs; Worry About Affording Healthcare in the Future; Support a Range of Government Solutions Across Party Lines, Healthcare Value Hub, Data Brief No. 133 (October 2022).

5. A 2019 Commonwealth Fund report noted that people with disabilities risk losing their benefits if they make more than $1,000 per month. According to the Center for American Progress, in most states, people who receive Supplemental Security are automatically eligible for Medicaid. Therefore, if they lose their disability benefits they may also lose their Medicaid coverage. Forbes has also reported on marriage penalties for people with disabilities, including fears about losing health insurance. See: Seervai, Shanoor, Arnav Shah and Tanya Shah, The Challenges of Living with a Disability in America, and How Serious Illness Can Add to Them, Commonwealth Fund (April 2019); Fremstaf, Shawn, and Rebecca Valles, The Facts on Social Security Disability Insurance and Supplemental Security Income for Workers with Disabilities, Center for American Progress (May 2013); and Pulrang, Andrew, “A Simple Fix For One Of Disabled People’s Most Persistent, Pointless Injustices,” Forbes (April 2020).

The survey used a web panel from Dynata with a demographically balanced sample of approximately 1,500 respondents who live in Connecticut. The survey was conducted in English or Spanish and restricted to adults ages 18 and older. Respondents who finished the survey in less than half the median time were excluded from the final sample, leaving 1,306 cases for analysis. After those exclusions, the demographic composition of respondents was as follows, although not all demographic information has complete response rates: