Three in five (62%) Missouri respondents have experienced one or more healthcare affordability burdens in the past 12 months. Four in five (82%) worry about affording some aspect of healthcare now or in the future.

Respondents living in households with a person with a disability more frequently reported affordability burdens than respondents without a disabled household member, including:

rationing medication due to cost (45% versus 23%); delaying or going without care due to cost (73% versus 47%); and going into medical debt, depleting savings or sacrificing basic needs due to medical bills (60% versus 33%).

Thirty-three percent of respondents of color in this survey skipped needed medical care due to distrust of or feeling disrespected by healthcare providers, compared to 22% of white respondents.

Fifty-seven percent of all respondents think that people are treated unfairly because of their race or ethnic background somewhat or very often in the U.S. healthcare system.

Differences in Affordability Burdents and Worries

Decades of policy choices made at all levels of government have led to structural economic inequality, unequal educational opportunities, and residential segregation, all of which have contributed in their own ways to worse health outcomes for many people of color. Present day disparities can take many forms, including overrepresentation in low-wage industries that don’t offer health insurance, denial of medical care due to clinician bias, and systemic disinvestment in healthcare institutions that serve people of color.1,2,3 Nationally, racial disparities in healthcare are well-documented, and affordability issues impact access to care and financial burdens for communities of color, particularly Black and Hispanic/Latinx communities, who shoulder a disproportionate share of healthcare affordability challenges ranging from high prescription drug prices to the impact of hospital price discrimination.4,5

In this survey, respondents of color reported slightly higher rates of affordability burdens than white respondents, including higher rates of rationing medication due to cost; delaying or going without care due to cost; and incurring medical debt, depleting savings or sacrificing basic needs (like food, heat and housing) due to medical bills (see Table 1).

In addition to rationing medication, respondents of color in this survey slightly more frequently reported difficulty getting mental health treatment and delaying/going without medical assistive devices due to cost, alongside problems getting addiction treatment and going without dental care (see Figure 1).6 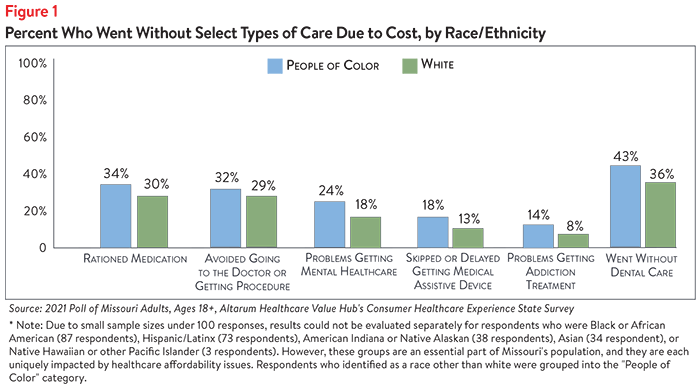 Although reporting responses for individual racial and ethnic groups is not possible due to small sample sizes in this survey, data from the nationwide Behavioral Risk Factor Surveillance System (BRFSS) 2019-2020 shows that, in Missouri, 11.5% of white people went without care due to cost in the past year compared to 19% of Hispanic/Latinx people, 22.1% of Black people, 23% of American Indian/Alaska Native people, and 16.3% of Asian American/Native Hawaiian/Pacific Islander people.7 These groups are clearly impacted by healthcare affordability issues in unique ways not captured in this specific survey, and further research is needed to gain a clearer picture of residents who are Black, Indigenous and People of Color.

The survey also revealed differences in how Missouri respondents experience healthcare affordability burdens by income. Unsurprisingly, respondents at the lowest end of the income spectrum most frequently reported affordability burdens, with almost three-quarters (74%) of those with household incomes of less than $50,000 per year struggling to afford healthcare in the past 12 months (see Table 2). Still, roughly half of respondents living in middle- and high-income households reported struggling to afford some aspect of coverage or care, demonstrating that affordability problems go far up the income ladder. At least 70% of respondents in each income group reported being worried about affording healthcare either now or in the future.

Respondents living in lower-income households also more frequently reported rationing care due to cost. Well over half (65%) of lower-income earners reported delaying or going without at least one healthcare service or treatment due to cost in the past year, compared to slightly less than half (40% to 46%) of those earning over $75,000. Additionally, over 1 in 3 (39%) respondents with household incomes of less than $50,000 reported not filling a prescription, skipping doses of medicines or cutting pills in half due to cost, compared to roughly 1 in 4 respondents in other income brackets.

Lower-income individuals also most frequently reported financial consequences after receiving healthcare services—50% either went into medical debt, depleted their savings or sacrificed other basic needs (like food, heat or housing) due to medical bills, compared to 33% of those earning over $75,000.

People with disabilities interact with the healthcare system more often than those without disabilities and, as a result, tend to face more out-of-pocket costs.8 Additionally, people who receive disability benefits face unique coverage challenges that impact their ability to afford needed care, such as the possibility of losing coverage if their household income or assets increase over a certain amount (for example, after getting married).9

Missouri respondents who have a disability or live with a person with a disability more frequently reported a diverse array of affordability burdens compared to others (see Table 3). These individuals also more frequently reported worrying about healthcare affordability in general (86% versus 80%) and losing health insurance specifically (41% versus 24%).

The survey also surfaced differences in healthcare affordability burdens and worry by gender. Women who responded to the survey reported slightly higher rates of having an affordability burden in the past year than men (65% versus 59%) (see Table 4). While women more frequently reported delaying or going without care due to cost in general, both men and women reported rationing their medications by not filling a prescription, skipping doses or cutting pills in half at roughly the same rate.

While most respondents of both genders reported being somewhat or very worried, a higher percentage of women reported worrying about affording some aspect of coverage or care than men (86% versus 78%).

Due to the small sample size, this survey could not produce reliable estimates exclusively for transgender or genderqueer/nonbinary respondents. However, it is important to note that these groups experience unique healthcare affordability burdens—1.3% of all survey respondents (12 respondents) reported that they or a family member had trouble affording the cost of gender-affirming care, such as hormone therapy or reconstructive surgery.

Distrust and Mistreatment in the Health System

Whether a patient trusts and/or feels respected by their healthcare provider may impact whether they seek needed care. In Missouri, nearly 1 in 3 (28%) respondents reported that their provider never, rarely or only sometimes treats them with respect. When asked why they felt healthcare providers did not treat them with respect, over half of respondents cited their income or financial status (52%), followed by physical, mental or cognitive disability (28%), race (20%) and gender/gender identity (19%). In lesser numbers, respondents cited ethnic background (16%), experience with violence or abuse (11%) and sexual orientation (9%) as reasons for the disrespect. 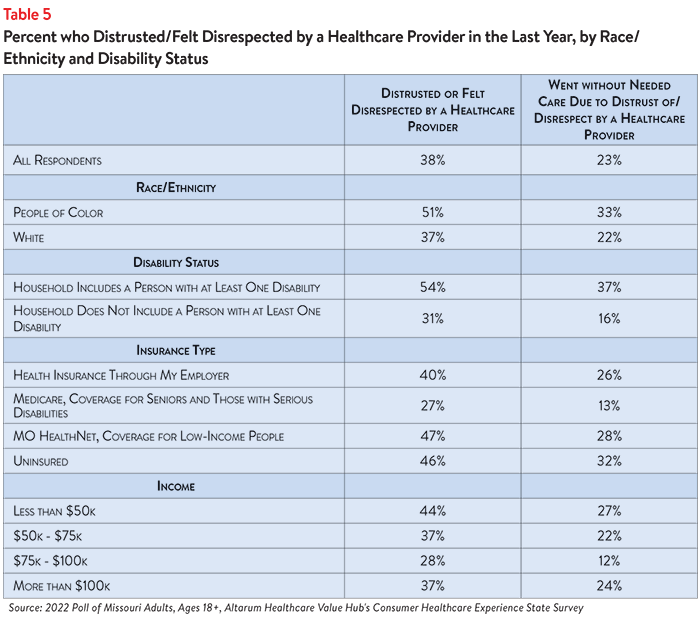 While small sample sizes prohibit capturing individual racial/ethnic groups in this survey, national research shows trends of discrimination for people of color. A national study found that the following shares of respondents experienced discrimination against their specific racial or ethnic group when going to a doctor or health clinic: 23% of Native Americans, 20% of Latinos, 32% of African Americans and 13% of Asian Americans compared to 5% of white Americans. Compared to white Americans, people from these groups also report avoiding going to the doctor out of concern they would be discriminated against at higher rates.10

In addition, respondents covered through MO HealthNet (coverage for low-income people) and those who are uninsured reported higher rates of distrusting or feeling disrespected by a healthcare provider compared to those with employer-sponsored insurance and Medicare. Respondents who are uninsured also reported slightly higher rates of going without needed care due to distrust/disrespect.

While respondents earning less than $50,000 most frequently reported distrust/disrespect, the percentage who went without care due to distrust/disrespect was similar to that of the $50,000-$75,000 and over $100,000 income groups.

Given this information, it is not surprising that 71% of respondents agree or strongly agree that the U.S.

healthcare system needs to change. Understanding how the healthcare system disproportionately harms some groups of people over others is key to creating a fairer and higher value system for all.

9. A 2019 Commonwealth Fund report noted that people with disabilities risk losing their benefits if they make more than $1,000 per month. According to the Center for American Progress, in most states, people who receive Supplemental Security are automatically eligible for Medicaid. Therefore, if they lose their disability benefits they may also lose their Medicaid coverage. Forbes has also reported on marriage penalties for people with disabilities, including fears about losing health insurance. See: Seervai, Shanoor, Shah, Arnav, and Shah, Tanya, The Challenges of Living with a Disability in America, and How Serious Illness Can Add to Them, Commonwealth Fund (April 2019); Fremstaf, Shawn, and Valles, Rebecca, The Facts on Social Security Disability Insurance and Supplemental Security Income for Workers with Disabilities, Center for American Progress (May 2013); and Pulrang, Andrew, “A Simple Fix For One Of Disabled People’s Most Persistent, Pointless Injustices,” Forbes.