A survey of 1,170 New Mexico adults, conducted from July 16, 2021 to August 11, 2021, found that people living in rural areas of New Mexico experience greater healthcare affordability burdens than people living in non-rural areas of the state. Roughly 7 in 10 (72%) rural adults experienced one or more of the following healthcare affordability burdens in the prior 12 months, compared to 6 in 10 (61%) non-rural adults:

1) Being Uninsured Due to High Premium Costs1

Moreover, cost was by far the most frequently cited reason for not getting needed medical care for rural residents while non-rural residents most frequently cited difficulty getting an appointment as the reason for not receiving needed medical care. Cost and difficulty getting an appointment exceeded a host of other barriers like transportation and lack of childcare for both rural and non-rural New Mexico residents.

The high burden of healthcare affordability, along with high levels of support for change, suggest that elected leaders and other stakeholders need to make addressing healthcare costs a top priority. Moreover, the current COVID crisis is leading state residents to take a hard look at how well health and public health systems are working for them, with strong support for a wide variety of actions.  Annual surveys can help assess whether or not progress is being made. 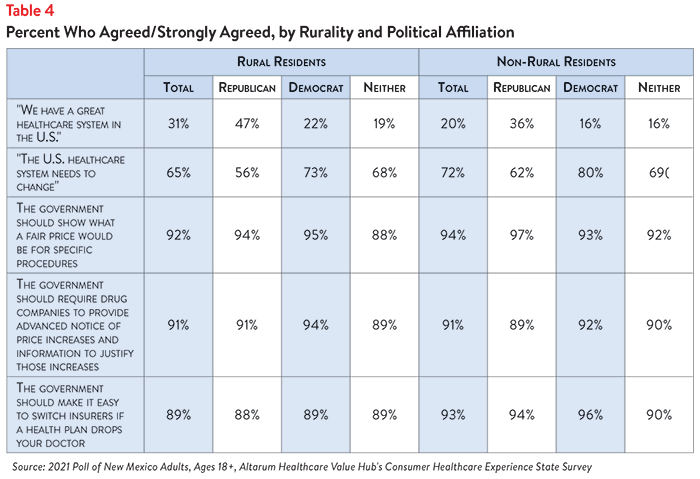 1. We received too few responses at the regional level to provide a reliable estimate for this statistic, however these respondents are represented in the overall “burdened” population.