Survey context: During the survey period, New Mexico was reopening and was at a high-point of vaccines being delivered daily. By mid-June, 2021, 59.4% of eligible adults were vaccinated, and statewide restrictions ended on July 1.1 Hospitalizations and deaths had been declining for several months, and residents were beginning to re-enter the world in greater numbers. New Mexico had been hit early and hard by the COVID-19 pandemic, and unemployment claims peaked at the end of March 2020 at 181,423 claims a week.

More than half (59%) of New Mexico adults encountered one or more barriers to getting healthcare during the prior 12 months due to cost:

Moreover, cost was the most frequently cited reason for not getting needed medical care, exceeding a host of other barriers like difficulty getting an appointment, transportation and lack of childcare.

Of the various types of medical bills, the ones most frequently associated with an affordability barrier were dental bills, doctor bills and prescription drugs. The high prevalence of affordability burdens for these services likely reflects the frequency with which New Mexico adults seek these services. Trouble paying for dental bills likely reflects lower rates of coverage.

While two of the most common worries—affording the cost of nursing home or home care services and medical costs when elderly—are applicable predominantly to an older population, they were frequently reported by respondents ages 18-54. This finding indicates that residents may be worried about affording the cost of care for aging parents, in addition to themselves.

Worry about affording healthcare in the future also varied by ethnicity, income and location (see Table 1). Eighty-four percent of respondents who identify as Hispanic/Latino report experiencing any healthcare affordability worry, compared to 77% of non-Hispanic/Latino respondents. Worry about healthcare affordability varies slightly between New Mexican adults living in rural and non-rural communities—83% of rural residents and 78% of non-rural residents report experiencing one or more healthcare affordability worries in the past 12 months. While New Mexico adults across the income spectrum report similar levels of worry, those earning less than $50,000 are most likely to worry about affording coverage and care.

Additionally, New Mexicans living in rural communities are more likely to report healthcare affordability burdens than non-rural residents, likely contributing to higher rates of forgoing needed care (see Figure 3). Sixty-six percent of rural residents report having gone without care in the past year, compared to 53% of non-rural residents. Additionally, almost half (43%) of rural adults report either not filling a prescription, cutting pills in half or skipping a dose of medicine due to cost concerns in the prior 12 months, compared to 24% of non-rural adults (see Table 3). 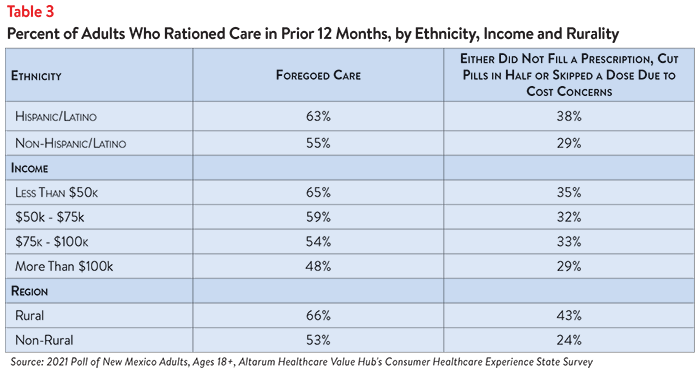 New Mexicans who identify as Hispanic or Latino are also more likely to report healthcare affordability burdens than those identifying with other ethnic groups (see Figure 3). Sixty-three percent of Hispanic/Latino New Mexicans report having gone without care due to cost concerns in the past year, compared to 55% of non-Hispanic/Latino residents.

While residents earning less than $50,000 per year most frequently report skipping and rationing due to cost, this behavior is common across the income spectrum. Almost half (48%) of residents earning $100,000 or more report forgoing care due to cost and nearly one-third (29%) have taken medication differently than prescribed. Even larger percentages of respondents in other income groups report having taken these actions in the past 12 months, indicating that the problem is widespread.

In addition to affordability worries, New Mexico residents were asked about their top worries related to the COVID crisis.4 When asked about “affording treatment of coronavirus/COVID-19 if you need it,” 60% of respondents reported being somewhat or very worried.

Separately, out of twelve possible responses, respondents were asked to pick the top three things they were most worried about with respect to COVID-19 (see Table 4). Twenty-eight percent of respondents identified affording COVID-19 treatment as one of their top three concerns.

In smaller numbers, New Mexico adults worry about many other issues, including: decreased value of retirement savings (18%); job loss and resulting loss of health coverage (18%); ability to vote safely (11%); and unavailability of COVID treatment if they or a family member gets sick (10%).

Though the increased availability of COVID-19 vaccines may have somewhat lessened worries surrounding the virus, it is important to note that 3 in 5 respondents (60%) remain somewhat or very worried about affordability related to COVID-19.

In light of their healthcare affordability and COVID concerns, it is not surprising that New Mexico residents are extremely dissatisfied with the health system. Statewide:

New Mexico adults see a role for themselves in addressing healthcare affordability. Survey respondents reported specific actions they have already taken, like researching the cost of a drug beforehand (58%), as well as actions they should be taking—79% said they would switch from a brand to a generic drug if given a chance.

There were also high levels of support for strategies to lower prescription drug costs:

There is also remarkable support for change regardless of respondents’ political affiliation (see Table 5). 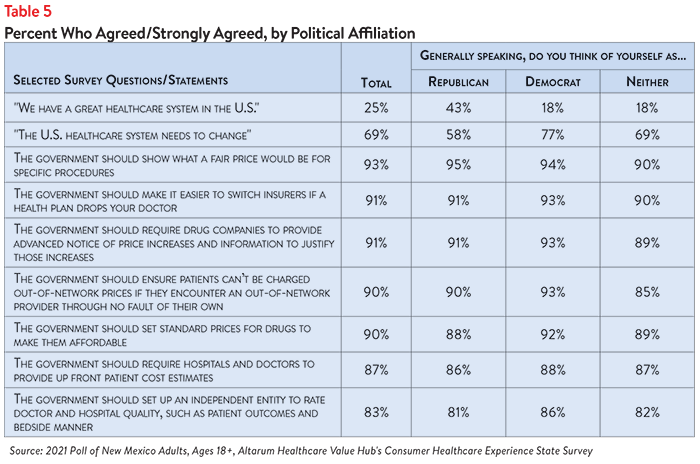 In addition to their views on the policies and approaches above, respondents were asked about support for and against policies related to the COVID crisis. Out of eleven possible responses, respondents were asked to pick the top three policies that would help address COVID-related problems. There was significant diversity in the policies supported, with the highest percentages of respondents selecting “Universal health coverage for all” and “Improved public health emergency preparedness” as a top three priority (see Table 6). 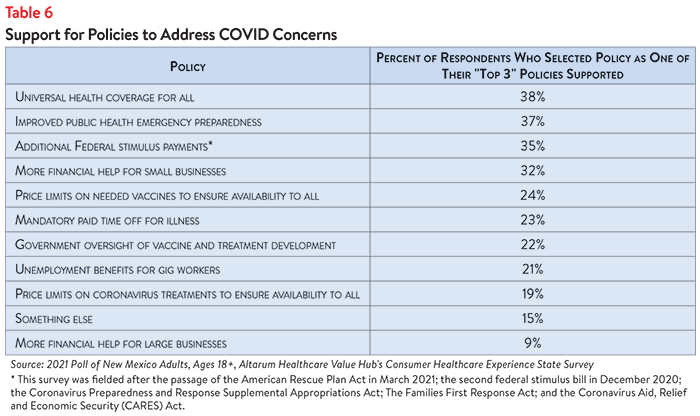 Conversely, when respondents were asked about which policies they did NOT support, 36% indicated that they did not support “More financial help for large businesses.” Trailing behind that (with 24% of respondents selecting) was “Universal health coverage for all,” although a higher percentage of respondents indicated support. In this area, there was a lack of agreement across party lines, with Republicans far more likely to NOT support “Universal health coverage for all” as a means to address COVID-19 concerns, compared to Democrats and those not affiliated with either party (see Table 7).

It is important to note, however, that when asked generically about “Expanding health insurance options so that everyone can afford quality coverage,” 88% of respondents agreed or strongly agreed with this policy as a means of improving affordability, with high levels of support across party lines.  When asked about the policies they did NOT support, respondents were given the option of selecting “I support all of the policies listed.” Thirty-one percent of respondents selected this option.

2. Of the current 33% of New Mexico adults who encountered one or more cost-related barriers to getting healthcare during the prior 12 months, 22% did not fill a prescription, while 24% cut pills in half or skipped doses of medicine due to cost.

4. COVID-19 is the disease caused by the coronavirus, which was characterized as a pandemic by the World Health Organization on March 11, 2020. For a comparison of how respondents from Connecticut, Kentucky, Mississippi and New Jersey answered our COVID questions, please see Healthcare Value Hub, How COVID Has Shaped Residents’ Broader Attitudes Towards the Health System, Data Brief No. 86.

The survey used a web panel from Dynata with a demographically balanced sample of approximately 1,250 respondents who live in New Mexico. The survey was conducted in English or Spanish and restricted to adults ages 18 and older. Respondents who finished the survey in less than half the median time were excluded from the final sample, leaving 1,170 cases for analysis. After those exclusions, the demographic composition of respondents was as follows, although not all demographic information has complete response rates: 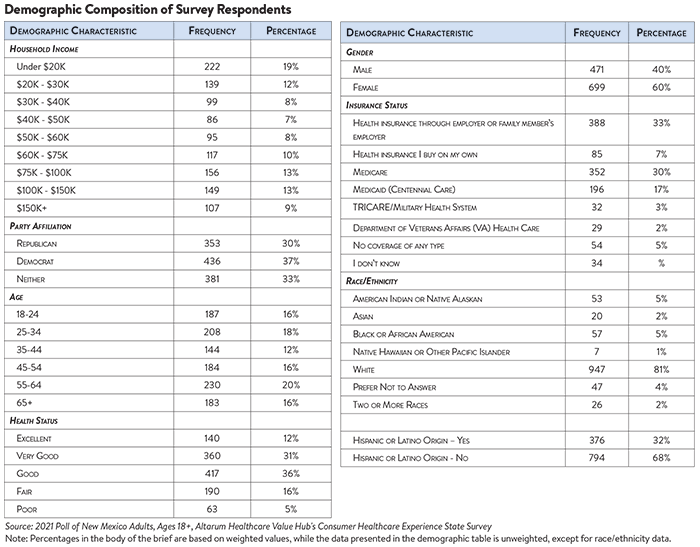