Nationally, consumer worry about healthcare affordability is well documented but now—for the first time—a new survey reveals how affordability concerns and ideas for action play out in Pennsylvania. The survey of more than 960 Pennsylvania adults, conducted from Aug. 28-Sept. 14, 2018, found that:

Like many Americans, Pennsylvania residents currently experience hardship due to high healthcare costs. All told, 51% of Pennsylvania adults experienced one or more of the following healthcare affordability burdens in the prior 12 months.

Being Uninsured Due to High Premium Costs

74% of uninsured adults cited “too expensive” as the major reason for not having coverage, far exceeding reasons like “don’t need it,” “don’t know how to get it” and other reasons.

Delaying or Foregoing Healthcare Due to Cost

Two out of five (41%) Pennsylvania adults who needed healthcare during the year encountered one or more cost related barriers to getting that care. In descending order of frequency, they reported:

Of the various types of medical bills, the ones most frequently associated with an affordability barrier were doctor bills, dental bills and prescription drugs, likely reflecting the frequency with which Pennsylvania adults seek these services—or, in the case of dental, lower rates of coverage for these services.

One-third (32%)of Pennsylvania adults experienced one or more of these struggles to pay medical bills:

Pennsylvania adults worry about affording healthcare in the future in numbers that exceed the number currently experiencing a healthcare affordability burden. Overall, more than four out of five (83%) reported being “worried” or “very worried” about affording some aspect of healthcare, including:

In addition, respondents were “worried” or “very worried” about not being able to afford health insurance in the future (68%). The greatest concern was among those who buy private health coverage or have Medicaid—nearly three quarters of adults were worried (Figure 1). In addition, more than half of Medicaid recipients were worried about losing their coverage.

The Southwest region reported the greatest rate of healthcare affordability burdens—58% of adults had one or more of the three types of burdens described above. In contrast, the South Central and Lehigh Valley region showed the fewest affordability burdens, although still high, affecting nearly half (47%) of adults (Figure 3). The number of survey responses in the Northwest region were insufficient to produce reliable estimates for that region.

But overall levels of worry about any healthcare burden was high across regions—80% or higher. Regional reports available at www.HealthcareValueHub.org/PA-2018-Healthcare-Survey. 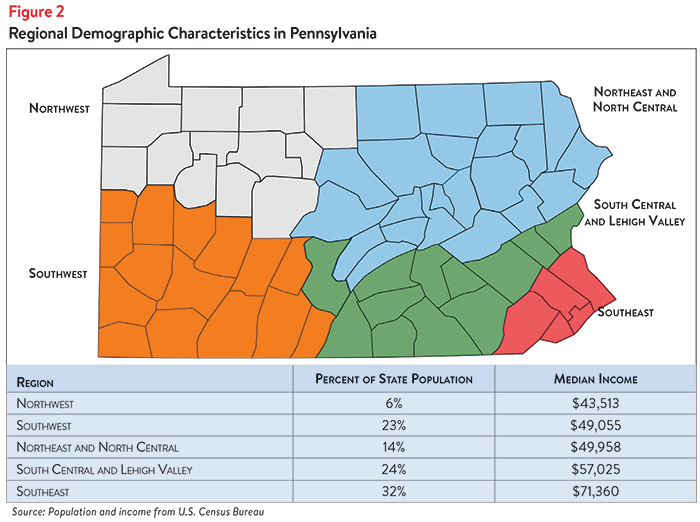 Dissatisfaction with the Health System

In light of these healthcare affordability concerns, it is not surprising that Pennsylvania residents were extremely dissatisfied with the health system. Statewide:

High Support for Many Specific Fixes to Health System

While Pennsylvania residents are united in calling for a role for government in addressing high healthcare costs, they also see a role for themselves:

Support for Change Across Party Lines

What is remarkable about the findings is high support for change regardless of the respondent’s political affiliation (Table 1). For example, 90% think the government should require drug companies to provide advanced notice of price increases and information to justify those increases, including 88% of Republicans and 92% of Democrats.

The high burden of healthcare affordability along with high levels of support for change suggest that elected leaders and other stakeholders need to make addressing this need a top priority. Annual surveys can help assess whether or not progress is being made. 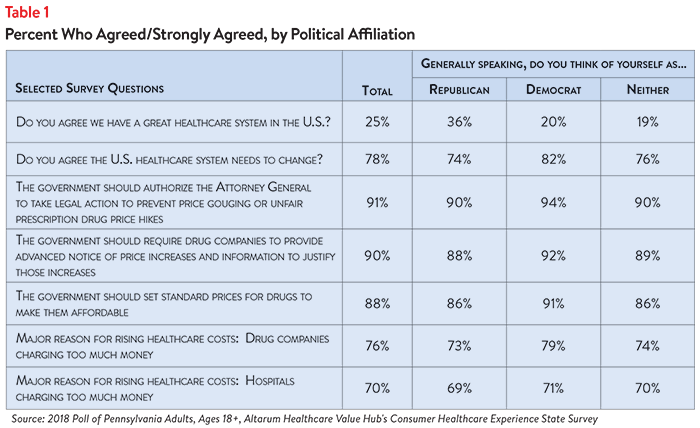 Altarum’s Consumer Healthcare Experience State Survey (CHESS) is designed to elicit respondents’ unbiased views on a wide range of health system issues, including confidence using the health system, financial burden, and views on fixes that might be needed. Regional reports are available at www.HealthcareValueHub.org/PA-2018-Healthcare-Survey.

The survey used a web panel from SSI Research Now with a demographically balanced sample of approximately 1,000 respondents who live in Pennsylvania. The survey was conducted only in English and restricted to adults ages 18 and older. Respondents who finished the survey in less than half the median time were excluded from the final sample, leaving 969 cases for analysis with weighting occurring in age, gender and income to be demographically representative of Pennsylvania. After those exclusions, the demographic composition of respondents can be found in the table below. 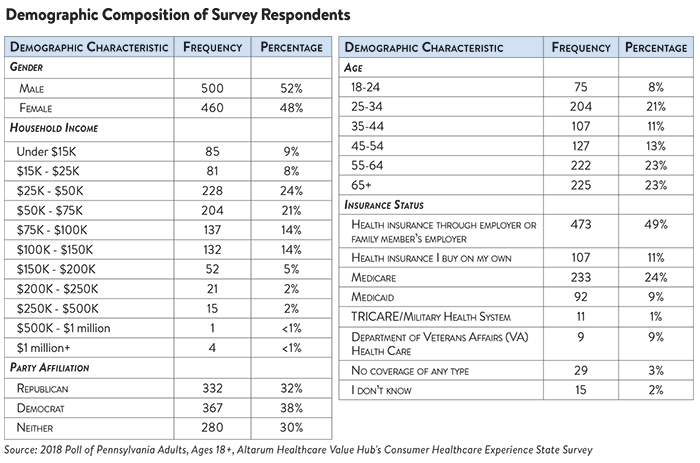