In a period of great political divisiveness, Pennsylvania adults are united around one topic—the need for government action to address healthcare issues, especially affordability.

A survey of more than 1,150 Pennsylvania adults, conducted from Oct. 30, 2020 to Dec. 10, 2020, revealed that Pennsylvania residents see government as the key stakeholder that needs to act to address health system problems. Moreover, addressing healthcare problems trumps other issues that Pennsylvanians want their elected representatives to work on.

When asked specifically about their healthcare priorities, 51% of respondents selected “Addressing high healthcare costs, including prescription drug costs” as one of the top 3 issues they want policymakers to address (see Table 2). Eighteen percent cited affordability as the number one issue they want policymakers to address. The next most important issue (preserving consumer protections) was identified as a top three issue by 40% of respondents and was the top priority for 14% of respondents. 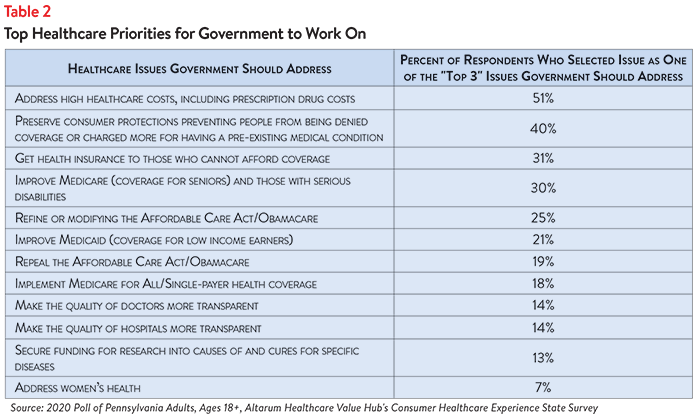 Moreover, support for some government actions was high, regardless of the respondent’s political affiliation (see Table 3). 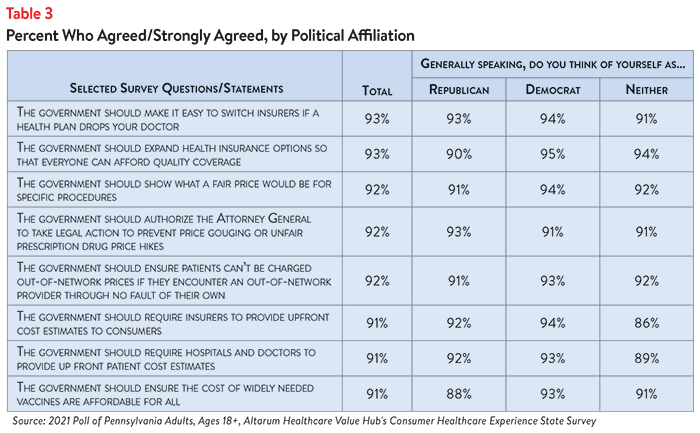 Pennsylvania policymakers should not ignore this unambiguous call for action by state residents. The high burden of healthcare affordability, along with high levels of support for change, suggest that elected leaders and other stakeholders need to make addressing these consumer concerns a top priority.